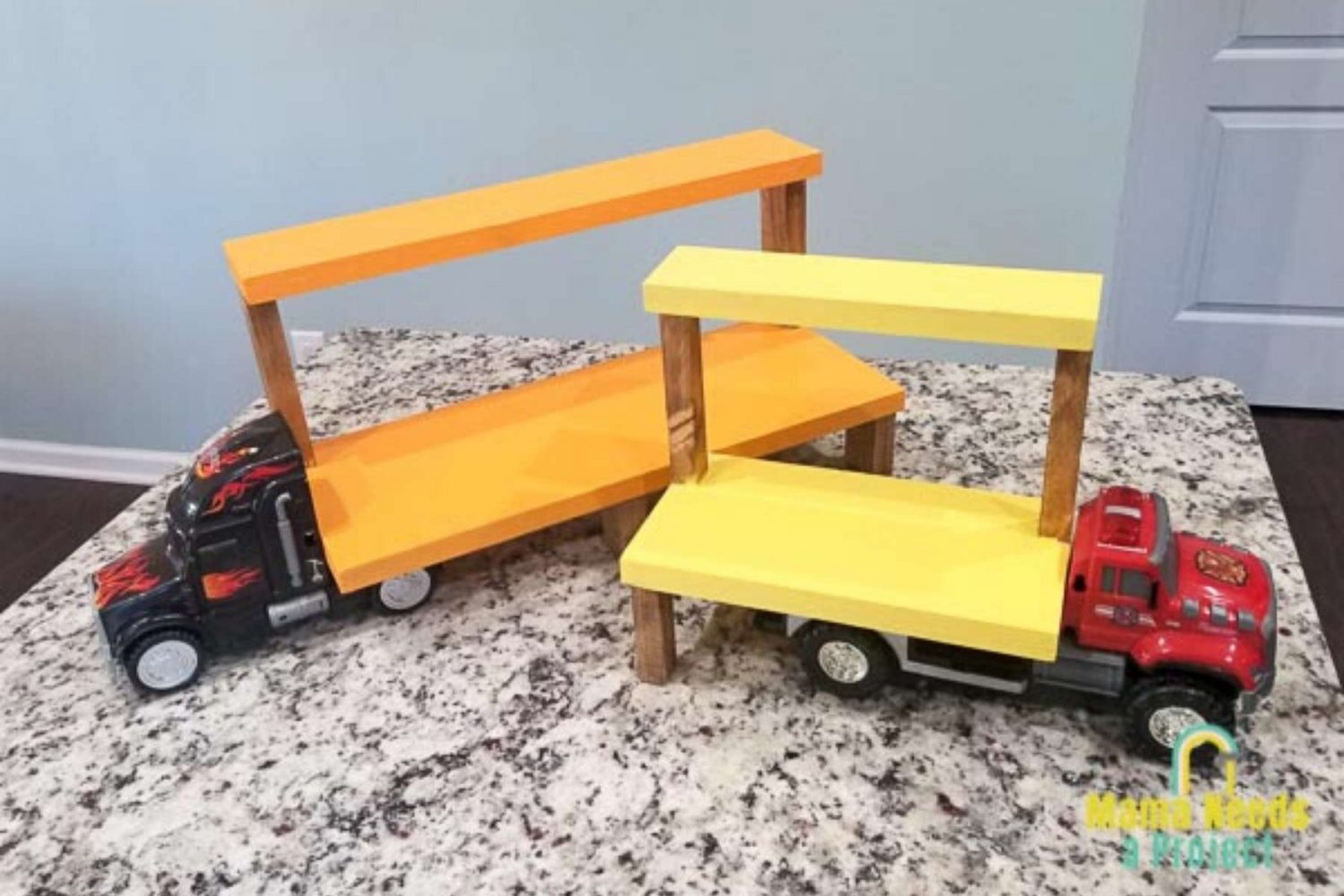 Learn how to turn a broken toy truck into a DIY Construction Party Cupcake Stand!

My son, like so many boys, is obsessed with vehicles, especially construction trucks and emergency vehicles. So for his 3rd birthday he chose a construction party. And I couldn’t help but make a few things for the food table.

I knew that I wanted to make a few things for my son’s party, but I didn’t want to go overboard. I’m a frugal lady and I tried my best not to get sucked into spending a ton of money on party supplies and decor. My son doesn’t care about that anyways! He just wanted to play with his friends and eat cupcakes.

So, keeping that in mind I came up with the idea for a DIY construction party cupcake stand. They were quick to make and so cheap! I used a broken truck we already had and picked up another one at the thrift store for $1.50. The trays are made from scrap wood and the paint and stain are colors that I already had on hand. I just love a cheap project!

And, as a side note, I know the trucks I used are not technically construction trucks. But, my son loved them just the same.

(I also have tutorials for the tire bowls and road blockade cupcake stand!)

When looking for toy trucks that I thought could be turned into a construction truck cupcake stand I search for a few specific things.

First, I looked at the condition of the truck. I wanted ones that were already not working – I would feel guilty about taking apart a perfectly fine toy. I knew I wanted to use the front or cab of the trucks so I just made sure that part was in good condition.

Next, I checked how the toy truck was assembled. You want to look for toy trucks that can be disassembled so the front and back are two separate pieces. I was actually looking for dump trucks to use, but I didn’t end up finding one.

I chose trucks where the assembly screws were visible because I figured if I could see how it was put together I could figure out how to take it apart.

The first thing I did was take apart these poor broken toy trucks.

For the semi truck this was pretty easy. I just use a long, skinny screwdriver to remove the screws that held the front and back of the truck together. It came apart very quickly.

The firetruck was more difficult to disassemble. I removed the screws, but could not get the truck to come apart. I removed the battery holder on the bottom of the truck and saw that there were screws inside holding it together that I couldn’t get to with my screwdriver.

After a bit of head scratching, I ended up taking a pair of pruning shears and just cutting through the plastic on the back of the truck to get to the interior screws. It wasn’t pretty, but it worked!

Once I had the trucks taken apart I searched through my scrap wood pile for boards that would work as trays. I didn’t have a set plan for this, but just built my trays based on the wood I had on hand and the size of the trucks.

I began by building the base of the shelf. I put the board I had chosen for the base shelf on top of the toy truck and measured from the ground to the bottom of the board. Then I cut legs at that measurement. I attached the legs using wood glue and a brad nailer.

I put together the top shelf in the same way as the bottom, with wood glue and a brad nailer.

I didn’t bother to clamp the joints or really worry much about how secure they were since my plan was to just use these trays once for my son’s party. But, if you plan to get multiple uses out of the cupcake trays I recommend clamping your joints to get a more secure hold from the wood glue.

Before I painted and stained my cupcake stands, I attached them to the trucks just to make sure my idea would work. Once I was confident that everything would fit together, I detached the trays and got to painting and staining.

I used paint and stain that I already had in my garage. I chose a medium brown wood stain for the legs and then painted the trays yellow and orange. The wood needed a couple coats of paint to get completely covered.

To attach the trays to the trucks I used a couple screws through the bottom of the truck. I pre-drilled my holes using a drill bit from this set and then used a couple wood screws.

For both of the trucks I had to add a little piece of scrap wood in between the tray and the truck bed in order to attach them and keep the tray level.

On the morning of my son’s party I showed him the construction party cupcake stands and he got so excited! In fact, he started driving them around. And, as I watched him drive them around I had a vision of a child doing the same thing at his party and all the cupcakes coming crashing down.

So, I added some hot glue to the wheels to keep them from spinning. And that was enough to keep the trucks from driving away during the party.

These toy truck cupcake stands were so fun to make! I don’t often start a project without a pre-made plan so it was pretty refreshing to just make this one up as I went along. And they turned out so cute!

If you’re planning a construction truck party these cupcake stands are such a fun addition to the food table – or to display anything!

If you decide to make this project, I’d love to see it! Share it with me pretty please? You can find me on Facebook and Instagram as @MamaNeedsaProject. Feel free to leave any questions in the comments below and I’ll get right back with you!