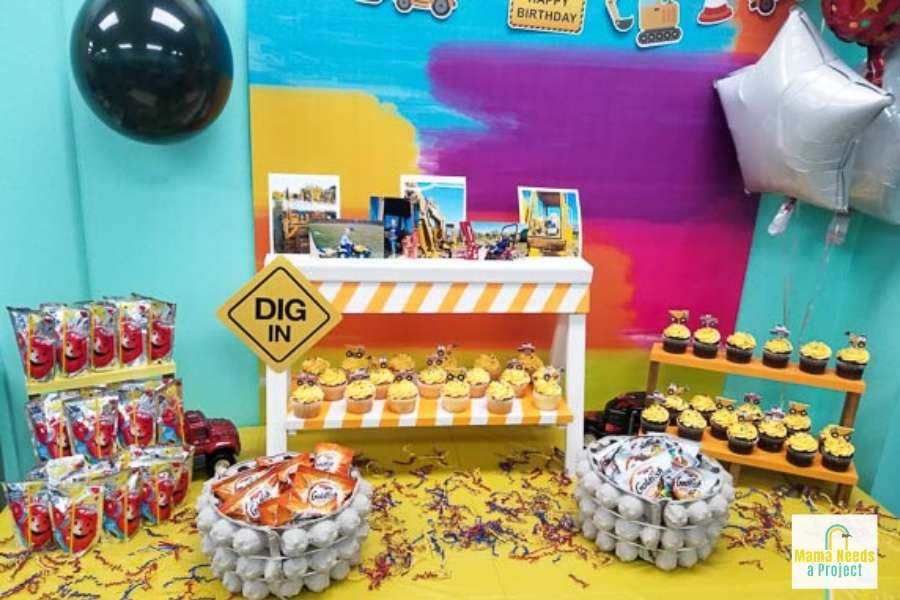 We celebrated my son’s 3rd birthday a few weeks early by inviting a bunch of his friends to a local children’s gym for an hour of play followed by some cupcakes. This was the first time we’ve thrown a birthday party for my son and it was so much fun to watch his excitement! He had a great time and I’m so glad we did it.

Having the party at the children’s gym instead of our home was AMAZING! My home is not very ‘child-proofed’ and I knew that if I had a bunch of children over I would be stressing the entire time. Renting the gym made the party so much easier and my husband and I got to enjoy the party right along with our son. It was such a special day.

Like many almost-3-year-olds, my son is obsessed with trucks so it was no surprise when he told me that he wanted a construction theme birthday party. And, as a budget-conscious mom, I was ready to find ways to make it happen without going overboard.

I kept the decorations simple and inexpensive, focusing mostly on the construction party food table. The DIY projects I did were made from things I already had on hand or things I purchased for just a couple dollars. All of the decorations that I bought were inexpensive purchases from Amazon or from the Dollar Tree.

Overall, the party turned out great! The decorations were cute, but the main focus was on my kiddo and watching him have fun and feel so special made for the perfect afternoon.

The food table was the main spot that I got to decorate for the construction birthday party and I had a lot of fun coming up with DIY projects to fill it up.

My favorite DIY project is the Roadblock Cupcake Stand. Didn’t it turn out so cute? I built it using scrap wood left over from previous projects and some left over paint. I love that I didn’t have to spend any money to make it.

I used my contractor table saw to add a little groove in the top of the Roadblock Cupcake Stand and used it to display pictures of my son on various tractors and construction vehicles. My father-in-law has a lot of big machinery and my son loves exploring them so we have lots of pictures. My son’s friends were quite impressed. hah!

The last project I did was the last minute tire bowls. These are made using egg trays and a couple of round reusable containers from the Dollar Tree. I wish that I would have had time to paint them to really look like tires, but I did this one on the day of the party so there just wasn’t enough time. Regardless, my son told me he liked the “monster truck tires” so I’m calling this last minute craft a win.

Everything was surprisingly good quality. I expected to receive a bag of junky, cheap decorations when I ordered, but instead everything was really nice. The signs and banner pieces are made with heavy, laminated paper. The cupcake toppers are thick and not at all flimsy.

We actually ended up keeping the decorations after the party which is great because I was expecting to use them once and then need to throw them away. Now I can give them to a friend or use them again if I need to.

I also purchased a cute birthday shirt for my son from Amazon, because I just couldn’t resist.

All Other Construction Party Decorations

When I look at the crazy-amazing birthday parties on Pinterest, I know that our minimal decor for this very DIY Construction Birthday Party doesn’t match up. And that’s okay! The number one goal for this party was for it to be fun for my son and not stressful. We totally met that goal.

I don’t believe that a child’s birthday party needs to be elaborate or expensive. (Not that there’s anything wrong with that.) All my son really wanted for his birthday was to play with his friends and eat cupcakes. Making the party look pretty was something I wanted, not him. So I chose not to overspend or go overboard trying to create a Pinterest-perfect party.

Instead, I focused on a few cheap DIYs, purchased some inexpensive pre-made decorations and let everything else be focused on making sure my son had a great experience.

I am way more sentimental about this party than I ever thought I would be. It melted my heart to see my son feel so special and it’s a memory I won’t soon forget! (And I know he won’t either.)

But if you’re a magician who can swing elaborate parties while remaining calm and still enjoying the day – you do you, girl! (Also, teach me your secrets.)

What do you think about our scrappy DIY Construction Birthday Party? Are you planning on making any these projects for your own party? Let me know in the comments below or find me on Facebook or Instagram as @MamaNeedsaProject.

I hope you have a stress-free birthday party full of fun! (and cupcakes)