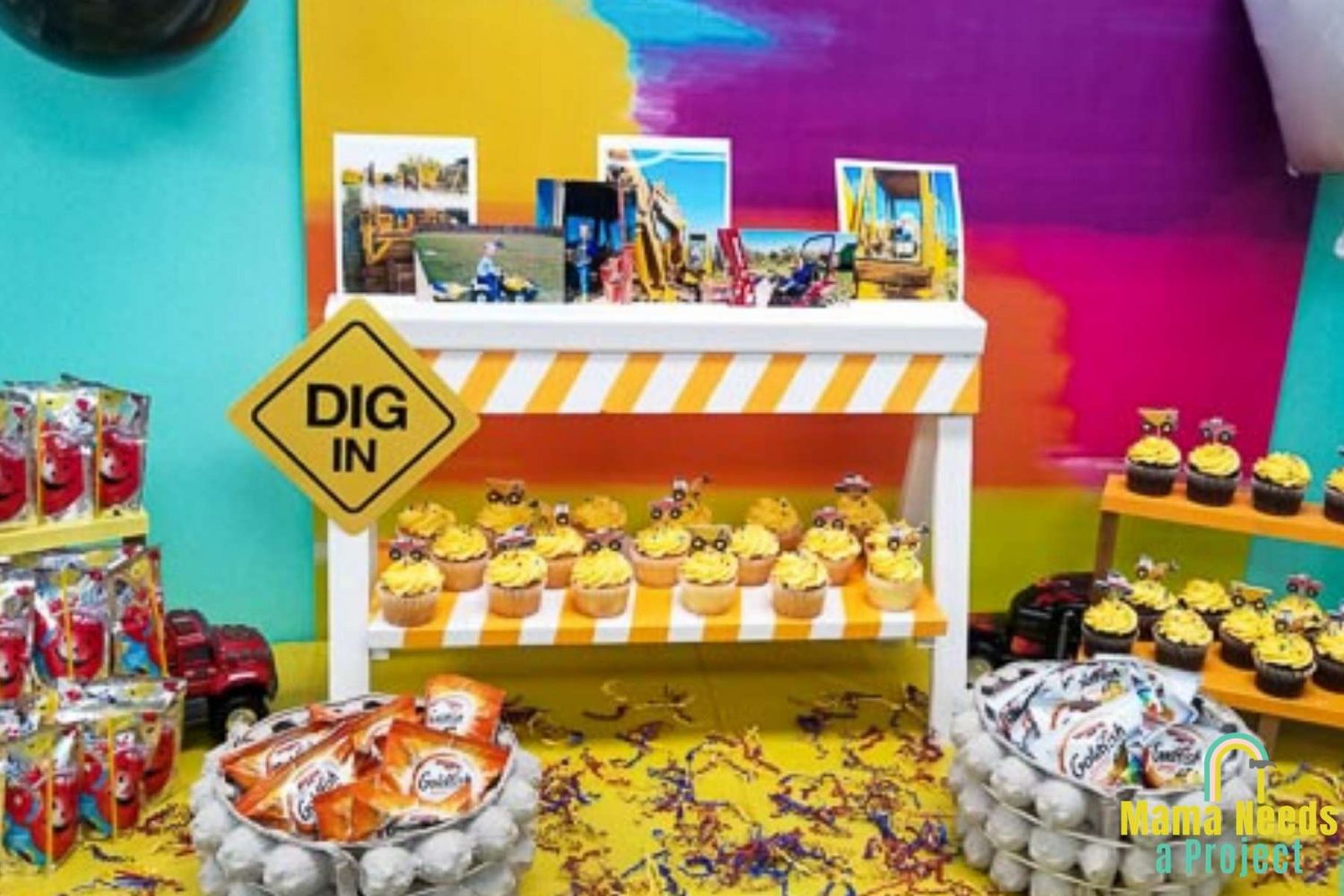 Learn how to build an easy roadblock cupcake stand for the food table at your DIY construction theme birthday party!

My son, like so many little boys & girls, is obsessed with vehicles, especially construction trucks. So I wasn’t at all surprised when he chose a construction theme for his 3rd birthday party.

This is actually the first birthday party we’ve ever thrown for him! It was so much fun to watch his excitement build up to the day of the party and all of his joy at the party.

I tried my best not to go overboard with decorations and projects that would just be used once. It’s so easy to fall into the Pinterest-perfect party trap and overspend for kids’ parties.

All my son really wanted was a day to play with his friends and to eat cupcakes, so I kept it pretty simple. But, I did make a few projects and tried to only use things I already had on hand to keep the party from getting too expensive.

My FAVORITE project is this roadblock cupcake stand! It was so fun to make and it turned out really cute. I usually start a woodworking project by drawing out my plans, but for this one I just made it up as I went along. It was really fun to figure it out as I went along and a great change of pace.

All the DIY projects that I did for this construction theme birthday party were focused around the food table. I mean, that’s the more important part, right?

In addition to the roadblock cupcake stand, I also made 2 toy truck cupcake stands from broken thrift store trucks. I used one for cupcakes and one for drinks. The last little DIY I did was to make the tire bowls on the day of the party. They’re so simple – just cut up egg trays wrapped around a bowl.

My son loved the DIY construction theme birthday party we put together for him! It was a fun challenge for me to create the food table decor and I think it turned out really nice.

All of the woodworking plans in my shop include a lumber list, cut list and supply list. They also feature digitally rendered images and detailed instructions that walk you through each step of the build. I use easy-to-understand language that’s perfect for beginners.

This project took me about an hour to cut the pieces and build. It’s fairly simple and can be build pretty quickly.

I think this Roadblock Cupcake Stand could definitely be built by a beginner woodworker. You need to be comfortable using a miter saw to make angle cuts. I also used a table saw to create a groove in the top of the cupcake stand to display pictures. If you don’t have a table saw or you aren’t comfortable using one yet, that part can easily be skipped.

I was able to build this project entirely out of scrap wood that I already had on hand from previous projects. If I was purchasing wood to build this project, I would expect to spend about $20 on lumber in my area. Lumber prices vary based on where you live, so your cost may be a little more or less.

How to Build a Roadblock Cupcake Stand

You can get the lumber shopping list and cut list for this project in the free printable woodworking plans in my plan shop.

I made the legs for this roadblock cupcake stand using scrap 1×2 boards.

I first cut the ends of all the boards at an angle using my miter saw.

Next, I attached two legs together by nailing and gluing a 1×2 between the two pieces. It was a little challenging to get the cross support at exactly the same height for both sets of legs.

To attach the cross supports I first laid the legs on the ground, putting the angled part of the legs flat against a long level with the tops of the boards touching. Then, I marked a line on each leg for where the top of my cross support should be.

Next, I used wood glue and a brad nailer to attach the cross support to the legs. Then, I stood them up and hoped they weren’t wobbly – and, they weren’t!

Once I had the legs completed, it was time for the shelf. I used a leftover piece of 1×10 board. Attaching it was pretty simple. I just put the 1×10 on top of the cross supports and secured it with wood glue and brad nails.

Instead of centering the 1×10, I left a longer overhang on one side. I figured this would make it easier for people to reach in and grab cupcakes off the shelf.

3. Finish up the top

The last thing I added was a 2×4 to cap the top of the construction cupcake stand.

To make it a little more fun, I used my table saw to cut a 3/4″ groove into the 2×4 and used that groove to display pictures we had taken of my son on tractors and construction vehicles. If I were to do this again I think I would try cutting the groove at a slight angle (maybe 10 degrees) and I think it would display the pictures better that way.

To attach the 2×4 to the top of the roadblock cupcake stand I just used long brad nails. Because the top is angled, there wasn’t a good spot to add glue. Using only brad nails doesn’t create a very strong hold so be sure that you don’t pick up the roadblock by just the 2×4 – it could come apart.

If you look at the roadblock from the side there is a gap under the 2×4 and the nails are visible. This didn’t bother me, but I wanted to point it out just so you were aware.

The last thing to do was paint. I started by painting the whole thing with two coats of white paint.

After the white paint was dry, I used painter’s tape to tape off vertical stripes across the shelf and across the 1x3s at the top of the cupcake stand. I spaced my tape 1″ apart. I then painted over it with 2 coats of orange paint.

I chose to paint everything and then attach the 2×4 to the top after the painting was completed. I think it was easier to paint the stripes this way.

This DIY construction theme birthday party was so much fun for my son and all of his little friends! (and for me too) I’m glad I decided to build this last minute roadblock cupcake stand because I just love how it turned out!

If you decide to display pictures, I recommend taping or gluing the photos onto cardstock. This helped the photos stand up much better than just sliding a photo in.

I can’t wait to hear from you!